The following is a speech deliverd by Jeff Kelley at an Eagle Scout ceremony in January 2013:

Ben Johnson, Aaron Lee, Diego Rocha, Zane Samuel, Spencer Wright, and AD Will-Arrego. Congratulations on your success in earning the highest rank in scouting. I speak for the adult leaders of Troop 202, present and past, in saying that we know what you went through to earn this award, and we are justly proud of your accomplishments. I take great pleasure in this public acknowledgement of your success here today. But as your Emeritus Scoutmaster, I’d like to add a few cautionary words about success.

Most of us know that success is just the flip side of failure. One might argue that success isn’t success unless it costs us something close to what it’s worth. If it comes too easy, success begins to seem normal and loses its meaning in our lives. The process of becoming an Eagle Scout is fraught with pitfalls; it’s not meant to be easy, it’s meant to mean something, and meaning – in spite of all the cultural messages to the contrary, especially those directed toward the young – meaning is never merely success. It is, perhaps, significance of purpose, purchased at the risk of possible failure.

During this holiday season it is fitting to observe that your generation is bombarded with messages about wealth, consumption, status, style, fashion, attitude, and success.

I wonder, though, how much you hear about meaning. For if meaning is bound up with significance of purpose and its attendant risk, then there’s something else you’ll need to take with you from this place: humility. Be humble enough in your moment of accomplishment to look around you, and you will see the most important people in your lives gathered here today in your honor. Be justly proud. At the same time, look inside yourselves and you will know that the rank you now carry you did not earn alone.

If I may speak for the adults in your lives – and as one of them – let me say that what I think what we want our kids right now is to be real. To understand that the world is bigger than their personal egos and desires. That there is real danger and real hope. That trivial things are just trivial things, and that achievements of significance are hard, take time, and can only be earned.

Ben, Aaron, Diego, Zane, Spencer, Adrian – you have earned this moment – hold it close – you’ve waited a long time for it – you’ve come from far away to get it – keep it with you for the rest of your lives – keep in mind those of us who brought you here – we remember when you came – we remember when you were small – it is hard to let you go now – but we are so proud!

Both my son Zack – friends of these boys – and I were in attendance at this Eagle Scout Ceremony.  This speech by Jeff brought tears to my eyes – his eleqouance and heart-felt words were incredibly special.  The entire ceremony was special – there was a slide show for each boy / young man, and they each also delivered a speech.  As I type this I get a little emotional thinking about these boys, their families and my own children and family – and reflect on what is meaningful in life.

I have known 5 of these boys, Ben, Aaron, Diego, Zane and Spencer for about 10 years.  I was their Den Leader (or Cubmaster)  in Cub Scouts (Pack 295 in Oakland) for each of the 5 boys, and also a soccer coach for 4 of the boys over multiple seasons.  I have a lot of shared memories of these boys growing up: Pinewood Derbies; campouts; Blue & Gold Dinners; Crocker Carnivals; soccer practices, games and playoffs.  Zack completed Cub Scouts in Spring of 2005 – he joined Boy Scouts Troop 202 in the Fall of 2005 but did not stick with it partly because we have moved from Oakland to Orinda. 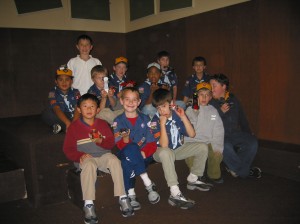 This is a photo from early 2003 – the boys are showing off their Pinewood Derby cars.  In the front row, starting from the left is Aaron, Zack and Diego – Ben is on the far right.  Spencer is fifth from left in the second row.  My guess is Zane did not join Pack 295 until the next year.

I am impressed by Ben, Aaron, Diego, Zane and Spencer, and their families, for completing the Boy Scouts program and earning the Eagle Scout rank.  It takes effort, perserverance, and support – all skills that will help them be successful in adulthood.  And I am pleased with my contributions – I was part of the “village” that helped raise them.