I wanted to let you know how rewarding it has been to observe and help you during my years in Kazakhstan. There has been awakening in society, throughout the World, about how important it is to respect and support all women. There is a long way to go in many places but I am grateful we worked together and I saw up close how capable, resilient and amazing you are!

I have shared with many of you that I was raised by a strong mother, have 2 great sisters, an exceptional spouse, an awesome daughter and fantastic nieces (3) and great-neices (3) – my family is blessed by them all. In my career I have had the good fortune to have an inspiring back-to-back (Sharon), top performing bosses (Barbara Smith and Cheryl Brandt) and an incredible General Director (Eimear Bonner).

These women, by their actions, encouraged me to help as much as possible to make TCO Designs Engineering sensitive, supportive, and challenging to you DE Women. The TCO Women’s Network and our DE informal discussions reinforce the World is better when Women are empowered and supported. The following recent article from the Washington Post demonstrates your leadership potential.

One favorite memory is when Eimear visited the 2018 KTL TA Trailers.  She pulled me aside and said it was good to see all the Women in Designs Engineering.  I replied that we have great Engineers and Designers in DE; it is not chance that many are women – we select the best available.

Thank you all!  Marc 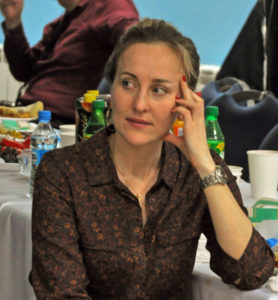 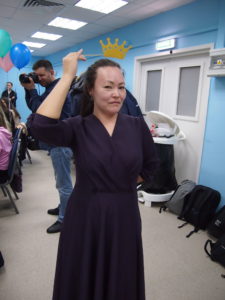 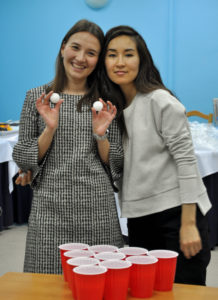 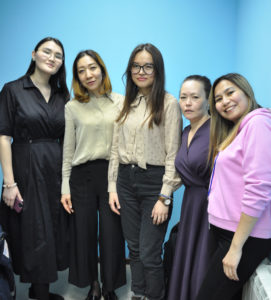 Here in Kazakhstan there is a lot of hand shaking going on.  The culture is very friendly and you see many Kazakhs greet each other with a hand shake.  A group of guys will be standing together and another person shows up, and the new comer will go around and shake everone’s hand.  Many times one of the Kazakh engineers in my group will walk by me down the hall and they will reach out and shake my hand, as a friendly greeting.  This happens several times each day.

In the US, hand shaking is more formal.  In the Western culture hand shaking is typically reserved for an introduction, or maybe sealing a deal or agreement.  We were taught (by our Fathers) to have a firm handshake (the firmer the better) and look the other person in the eye.  I reflect that I drilled my own sons that when they meet someone they should deliver a very strong handshake, look them in the eye, and say “My name is Andrew (for example), it is nice to meet you.”  I had another parent tell me one of my son’s is a great kid, based upon his first introduction where Zack had a very firm handshake and looked this parent in the eye (which reinforces the adage “You never get a second chance to make a good first impression.”)  I took great pride in this feedback.

Recently I had a career discussion with one of the engineers in my group.  As he left my office I reached out and shook his hand.  Of course I demonstrated a firm handshake while his was noticibly less strong.  I reflected on this as I think very highly of this engineer – know he is a sharp and engaged individual.  This is when I tumbled to the realization that hand shaking is much more informal here in Kazakhstan – it is more a friendly greeting.  Kazakh’s do not use handshakes to impress others or indicate their “manliness.”  Instead of a wave or a nod like in the US, they instead greet each other with a shake.  But it is a light shake, not a firm “nice to meet you” shake.

So I have resolved to soften my handshaking in Kazakhstan – I’m in their culture not mine.  Maybe some day I can convince them to perform a knuckle bump (it’s more hygenic) but for now will just remind myself there is no need to impress, it’s only a friendly greeting.

We had an unplanned shutdown of a propane dryer skid earlier this month – several pieces of equipment, piping and instruments damaged – have another “schedule-driven” project that I am involved in, if you know what I mean.  Not the biggest incident I have been involved in but we still need to go through all the steps of incident investigation, assessment, demolition, purchase materials before you know what is damaged, develop design packages before you know what needs to be replaced, and build everything back as quick as possible – just the way some of us like it – all phases all the time.  A couple small pieces of equipment will take 6 weeks to fabricate, and we will cut back some home run cables and install some intermediate I&E junction boxes; should have it all back together in early March.  Makes the time go fast.  What is different is no need to figure out who is working this weekend, who needs a day off – everyone works every day here.  But you do need to pay attention to who is rotating in and who is rotating out, need to make sure the various action items and work move forward.

The other interesting aspect is facilitating a daily rebuild coordination meeting with Reliability, Engineering, Operations, Maintenance and HES – lots of people, various perspectives, and two languages.  My solution is to use a conference room that has two in-focus machines and two tranlators.  I facilitate and scribe the meeting in English, have a translator handle the verbal translation, and then another translator who is following my meeting notes and converting it to Russian during the meeting.  It seems to be going well with this approach; I can see that the Russian speakers are reading the notes in Russian and are bringing up issues for clarification.   It also makes the meeting go faster because people can read the agreements in either language and we do not need to meticulously translate verbally between the two languages.

Today we celebrated Oilman’s Day at TCO – they had a concert at one of the domes (if I go I will provide a review later).  Oilman’s Day is always the first Sunday in September, at least in Kazakhstan.  Via a google search I learned that this “holiday” was officially established by an order of the Supreme Soviet Presidium in 1980.  After the USSR broke up in 1991 Russia, Kazakhstan and Ukrain continue to celebrate this holiday (per the Kazakh Lead Engineer who works in my group).

As a going away present when I left the Richmond Refinery, my boss Barbara Smith, gave me a copy of this book.  The full title is Apples Are from Kazakhstan: The Land that Disappeared by Christopher Robins.  I believe it was published in 2008.

I enjoyed the book and initially thought of writing a review.  But before I did I looked at what was written on amazon.com.  The following review by “Graham” from Palo Alto on amazon.com, published on July 4, 2008, covers most of what I thought.  I did laugh out loud a couple times.  Once I have been in Kazakhstan for a while I will ask some of the locals what they think of this book.

This is a strange mixture of a travelogue and an anecdotal history of
Kazakhstan. Robbins characterizes Kazakhstan as an ancient country which has
been long forgotten in the West, and he seeks to rediscover the diversity of its
past and present.

He describes his travels from the wild steppes of the
central country, to the old capital at Almaty, to the nightclubs of the brash
new modern capital at Astana. As we travel, he provides interesting historical
side stories on the Kazakhstan exiles of Trotsky, Dostoyevsky and Solzhenitsyn;
on Sakharov’s witnessing of the first Soviet H-bomb tests; and on the horrific
forced labor camps of Stalin’s Gulag. He also recounts many other fragments of
its history, not least that indeed “apples are from Kazakhstan”.

As part of his visit, Robbins had multiple interviews with President Nazarbayev and was
allowed to travel with him during a tour of some of Kazakhstan’s remoter areas.
Nazarbayev’s quoted reminiscences are interesting, especially around the fall of
the Soviet Union and the birth of independent Kazakhstan (although like all
politician’s memoirs, his words should probably be read cautiously). Robbins has
clearly benefited from Nazarbayev’s help and in return he is notably delicate in
addressing potentially awkward issues. There have been allegations of
significant high level corruption in Kazakhstan and of the forcible discouraging
of political opposition, but these are not topics that Robbins dwells on.

On the plus side, Robbins has clearly fallen in love with Kazakhstan and
he paints a broadly sympathetic picture of a country that has a difficult past,
a beautiful but often barren landscape, a climate of hot summers and extreme
winters. He presents a country which is relatively tolerant and, with the
benefit of oil wealth, is growing prosperous and (by the standards of the
region) relatively open.

This is more of a travelogue than a deep history or social analysis, but I found it consistently interesting and educational, and often amusing.