If you have checked Jeremy’s website, you have learned that he passed away on 19 August 2013.  His doctor thought he would live six months when he was first diagnosed, he made it about eight.  When you read his blog (link below, it still works as of January 2014) he had ups and downs, but figured out how to live the last few months of his life to the fullest, just like he led his life before his diagnosis.

Several people have sent me condolences – I really appreciate this.  I did get a chance to see him each rotation home – unfortunately I was not able to attend his memorial service as I had just traveled back to Kazakhstan.  The visit in late May 2013 he shared how he was arranging his donations, particularly the orphanages in Laos he supported.  We went out for a walk that visit – picture below is with our common friend Mike – Jeremy in the middle.  My last visit in early August was with his great friend Andrea – we hung out and ate a little, drank some wine and Jeremy talked about how he was giving away all of his possessions to his family and his friends.  He had put a lot of thought into making sure his possessions went to people in need or would be special memory for the participant.  What is most impressive is he gave his home away to two friends who live in SF but cannot afford to purchase a house.  Generous to the end. 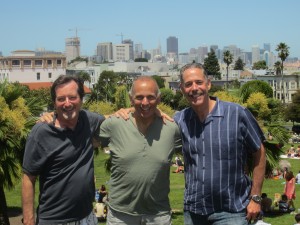 Jeremy started a blog when he found out he had cancer.  The site is www.cookeatgo.com; the user name is “viewer” and the password is “horsef***er” (fill in the * with the correct letters, just can’t make myself type it out).  Makes my blog’s password of “santa” seem kinda lame, but not shocking.  Jeremy is a good writer, never knew that about him.  I log onto it periodically to see how he is doing.  Recently he learned that the light chemotherapy he was taking is helping – said he was a chemo f***ing superstar, made me laugh.

So how does having a friend who has cancer feel?  Makes me wonder how I would handle it?   What can I do to comfort him?  I need to remember to take pictures of him when I see him next. Maybe we should go on a walk and take pictures everywhere – get strangers to take pictures of us together at various spots.  Karen and I are going to visit him on Sunday, go to Glide Memorial Church with him.  Just went to Glide before Christmas, enjoy the singing but get bored by the congratulatory statements on all the good they do – feels like an infomercial. I enjoy watching the people enjoying themselves, connecting.  Jeremy writes on his blog how much he likes going to Glide – believe he liked it before but looking into death it now has more meaning to him?

Thinking about Jeremy reinforces that I want to spend time with my children, just be with them, and enjoy them.  Let go of my need to get things done and just be around them to connect and share.  Guess when a person contemplates their mortality you realize it’s the relationships that make life worth living, not the wealth or job or prestige.  Also makes me think I would like to retire sooner than later, spend time doing what I enjoy doing vs. the “stuff” that goes with working for a large company.  But that said I enjoy lots of my career with Chevron, including the people and the challenges.

So now this getting to be about me, and not Jeremy. I’m going to call him as soon as my flight lands in San Francisco and ask how he is doing.

I wrote this entry while travelling home from Kazakhstan in mid-February.  We did go to Glide Memorial Church (http://www.glide.org/) with Jeremy on 17 February – he had other friends there too.  We then went out to lunch with him – learned about his travel plans and how his chemo is going (has multiple trips planned and the chemo is going great).  Will plan an outing with him next time I am home in April. 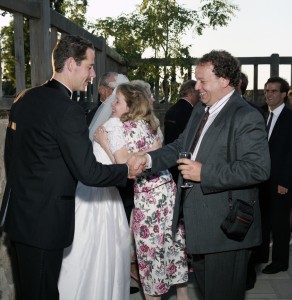